At Ecuador boutique travel we believe that the finest things in life are small and intimate. Ecuador is a country small in size yet big in heart, one of the most biodiverse nations in the world and rich in live cultures.

Travel around Ecuador is rewarding for all visitors from the cultured explorer to the college student that comes to learn Spanish, from the family that comes with Grandma and Grandpa leading their toddlers into a new experience, to the newly weds on their honeymoon. Ecuador offers cultural discovery and close encounters with nature.

We have put together a travel planner with general information for visitors and a background knowledgebase to help our partners sell this wonderfull destination. This section includes: Travel Planner with country info, Tips, FAQS, a destination guide to Ecuador´s continental regions and several photo galleries.

Do no hesitate in contacting your travel agent or tour operator should you need additional info we may have left something out, as we do not pretend to be able to say everything about Ecuador, we offer a comprehensive guide to assist you in planning your vacation.

Tap water can be drunk in most parts of Ecuador but the chemical content is different in each place. To avoid problems we recommend that you drink only bottled water.

Ecuadorian food in the Andes consists mainly of soup and stews, corn pancakes, rice, eggs and vegetables. Seafood is particularly good, even in the highlands, with ceviche a favourite throughout Ecuador. It consists of uncooked seafood marinated in lemon and served with popcorn and onion. Sounds strange but tastes delicous. Other local specialties include caldo de patas, a soup made from cattle hooves; cuy, whole roasted guinea pig; and lechon, suckling pig. Guayaquil, the heart of the south coast, has the gamut of cuisines. Patacones, fried plantain chips, are a favorite side dish of the coastal dwellers.

Although we recommend you to try the local and international cuisine available in Ecuador, which is known throughout the world as some of the best, we would also say that the main fast food chains also have branches in Quito, Guayaquil and Cuenca.

Due to geographic differences in altitude, longitude and latitude, and the climatic effects of the Pacific Ocean, the Amazon, and the Andes, the various regions and sub regions of Ecuador have very different climates and microclimates.

The Pacific coast has a rainy season between December and May and a dry one from June to November. The temperature oscillates between 23 and 26 degrees centigrade. You can wear lightweight clothing all year round, yet it is advisable, here to use clothes that you can change easily.

The Highlands, on the other hand, has a rainy, cold climate from November to April and a dry one from May to October. The temperature here is between 13 and 18 degrees centigrade. It rains from November to April so waterproof clothing is essential. Sweaters / jumpers, jackets and long trousers are necessary.

In the Amazon, the climate is rainy and humid between January and September, with temperatures between 23 and 36 degrees centigrade, and it is dry between October and December. The same type of clothes are suitable all year: tropical kit but always with long trousers and lightweight cotton shirts with long sleeves, which are not too hot but protect against jungle insects. Don't forget waterproof boots or trainers for walking, absorbent socks, a hat, waterproof, swimming costume, sunglasses, sunblock, repellent, binoculars, torch and a water bottle or canteen.

The Galapagos has a temperate climate with temperatures ranging between 22 and 32 degrees centigrade. In the evenings on board the cruise boats it can get windy and chilly a windbreaker or sweater is recommended.

As in all the world's large cities, there is a high incidence of handbag snatching. We therefore recommend that you carry money and credit cards in a money belt and don't take a handbag unless it is absolutely essential.

The main hotels have safe deposit boxes and we suggest you leave your valuables, passport and air tickets there. Be very careful with handbags, cameras and video recorders, especially in places where lots of people congregate, such as markets, Bus stations and public squares, etc.

Tourists should use common sense to ensure their safety. Most tourists who avoid flashing large amounts of money, visiting areas near the Colombian border, civil disturbances, side streets in big cities at night and that sort of thing report few problems. Probably the biggest threat in most places is simple thievery: Belongings should not be left unguarded on the beach, for example. Hotel personnel are generally good sources of information about places that should be avoided.

Ecuador continental time is GMT -5 hours, in the Galapagos Islands it GMT -6 hours. Also don't forget that we are in the tropics, where people have a rather relaxed attitude to time.

We, of course, take particular care to avoid any delays.

Ecuador uses the US dollar (USD) as its currency. Other types of currency are not readily accepted.

U.S. paper money is used for most transactions. Ecuador has its own coins, which are approximately the same size and color as U.S. coins up through 50-cent pieces; both they and U.S. coins are used. U.S. dollar coins are also widely used, more so than in the U.S. Many merchants examine large bills ($10 and above) carefully to make sure they aren't counterfeit. Outside of tourist areas, many merchants do not keep large amounts of money on hand, so getting change for large bills (or even small ones) may be difficult.

The Euro, Sterling Pound and other exchange rates are variable. We suggest checking with Ecuador Boutique Travel personnel, your hotel reception or a bank. Try to keep small denomination notes to make transactions easier.

If you want to change your currency into U.S. Dollars we recommend you do this in your own country or to do so at a bank. For your security, do not have anything to do with street money changers.

Travelers' checks can be exchanged at some (but not all) banks for a reasonable fee (usually not more than 3 percent). They are also accepted at some hotels that cater to tourists, although it is difficult to use them elsewhere.

Credit and debit cards are accepted at many places that cater to tourists as well as at some upscale shops. However, many places charge a commission for their use as reimbursement for what the banks charge them. You may be asked to show your passport when using a credit or debit card.

Automated teller machines are widely available in major cities and tourist areas. Most are tied in with major international networks, making it possible to withdraw money from foreign accounts, although a transaction fee usually is charged.

Prices vary widely in Ecuador. Costs at upscale hotels and restaurants seem to be close, maybe 10 percent less, to what they would be in the United States. Outside of tourist areas, costs are much less. It is possible to get a meal at a clean restaurant for under $2 or to pay less than $10 for a clean but basic hotel room.

The electricity in Ecuador is the same as in the United States and Canada 110 V 60 Hz. Many hotels are equipped with both 110 and 220-volt options. Many older Hotels and Haciendas do not allow for polarized plugs, appliances with uneven, straight pins, or 3 prongs may require an adapter.  These adapters are available at hardware stores throughout the country.

By bus
Intercity buses travel to almost everywhere in Ecuador. Many cities have a central bus terminal, known as the terminal terrestre, where it is possible to buy tickets from the various bus lines that serve the city. Long-distance buses typically cost from $1 to $2 per hour, depending on the distance and the type of service. Buses are frequent along major routes.

By taxi
Taxis are widely available. Taxis are generally yellow and have the taxi license number prominently displayed. In Quito during the day Taxis must use a taximeter, at night and outside of Quito agree upon a price before getting in; short trips generally don't cost more than $1 or $2, and you generally shouldn't end up paying more than $10 per hour, if that, for longer trips. Remember to carry coins to pay the fare.

Internet
Internet cafes can be found nearly everywhere in the major cities and in many of the smaller ones. Cost is typically less than $1 per hour in the large cities, and the better places have high-speed access.

Telephone
For most visitors, the easiest place to make phone calls is an Internet cafe, most of which provide VoIP service at reasonable rates. You can call the United States for about $0.10 per minute and Europe for a bit more. Avoid making a phone call through an operator; the cost cost for an international call can be $3 or more per minute. Calls within Ecuador (except to cell phones, where the recipient pays) cost more. Visitors making and extended stay should consider purchaing a cell phone. Most are sold on a prepaid-call basis, and phone refill cards can be purchased in all but the smallest towns. Ecuador uses a different cell phone standard than most of the world does, so trying to get a typical cell phone from elsewhere to work can be problematic.

Even though Ecuador is a very beautiful country it does not know how to sell itself very well. In Quito a very famous touristic site is El Mercado Artesenal where many souvinears can be found but after a thourough look around you will realize that there is a bit of redundancy in the items in the sense that everyone is basically selling the same thing so after buying a few main items it becomes difficult to find much more variety. Almost everything that can be bought has a price that can be bargained.

Open Air Markets
The produce market and open air markets is an integral part of Cuenca. While you might not find much to buy at the market other than exotic-looking vegetables, you'll be right in the center of a special weekly social occasion that holds the community together with a fiesta-like atmosphere of buying, selling, and visiting.

Ecuador Paja Toquilla "Panama" Hats
If you're seeking high-quality souvenirs, you'll want to inspect the Ecuador straw hats, leather jackets, embroideries, gold jewelry, and ceramics. In fact, you'll find a hat factory and shops that sell only fine Straw hats, which are not made in Panama at all. These hats were first made in Ecuador by poverty-stricken Cuenca residents of the 1830s, trying to make a living. Get yourself a Ecuador hat and save a dying art!

Otavalo Market
Are local craft and product markets high on your travel expectations? Otavalo, a small city and a ride of just over two hours from Quito, is the place for you. Otavalo is by far the most famous indigenous market in Ecuador, and perhaps South America. Villagers from surrounding areas have been bringing their wares down from the hills to the Otavalo market for hundreds of years, spending a day filled with bartering, exchanging, selling, and socializing. Today, the market draws huge crowds of locals and visitors every Saturday (the market is there everyday of the week). Musical instruments, dolls, jewelry, produce, crafts of all sorts -- you'll find it at the market.

Otavalo is especially known for weavings and the people have been accomplished weavers for centuries. You'll discover an array of tapestries and clothes at the market and an almost unbelievable array of colors. A large portion of the market is devoted to tourists, and people flood the streets, making for a circus atmosphere. At a quieter time, you can visit the workshops of the hard-working weavers, working on backstrap and Spanish treadle looms, along with other artisans at work making hats, weaving straw mats, and knitting sweaters. 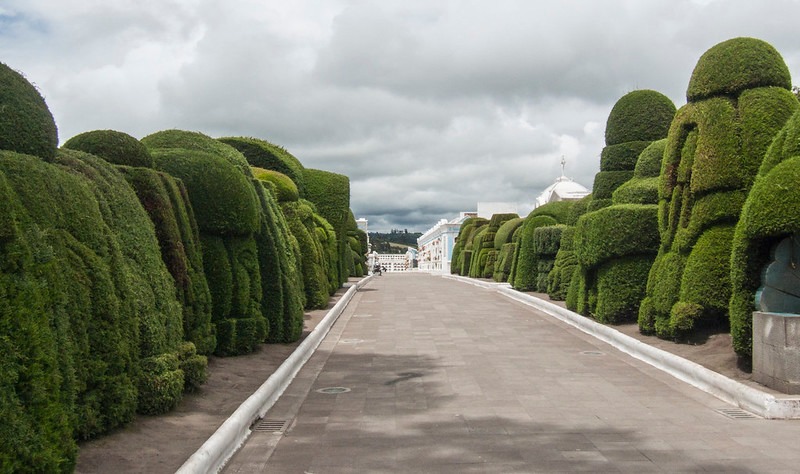 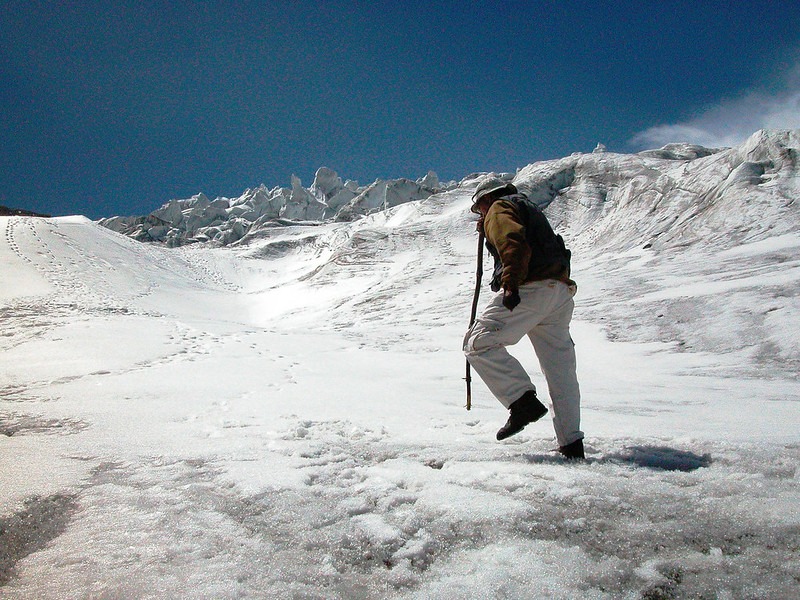 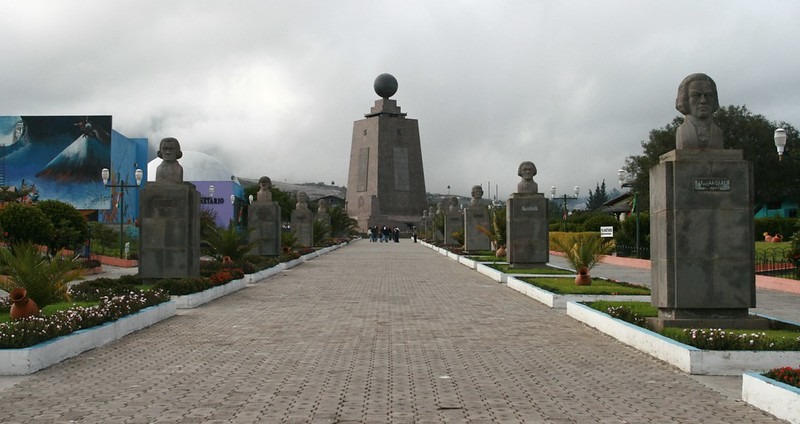 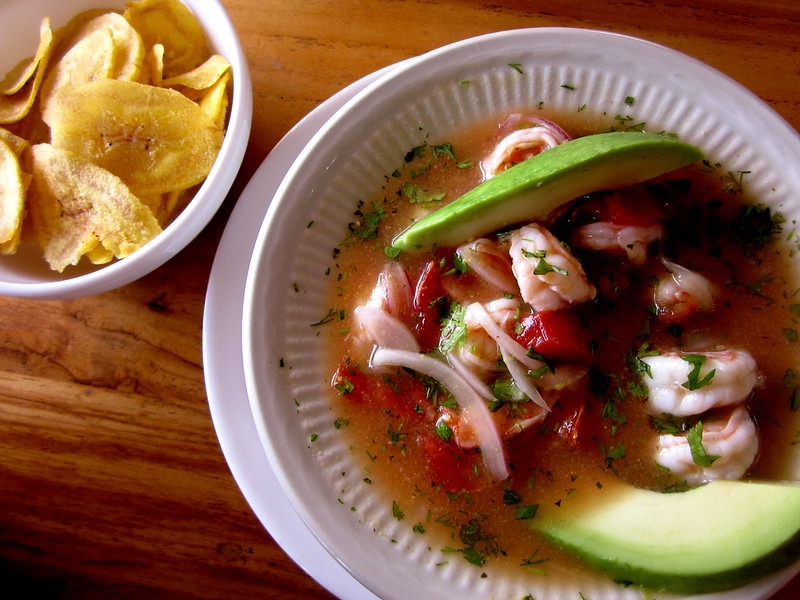 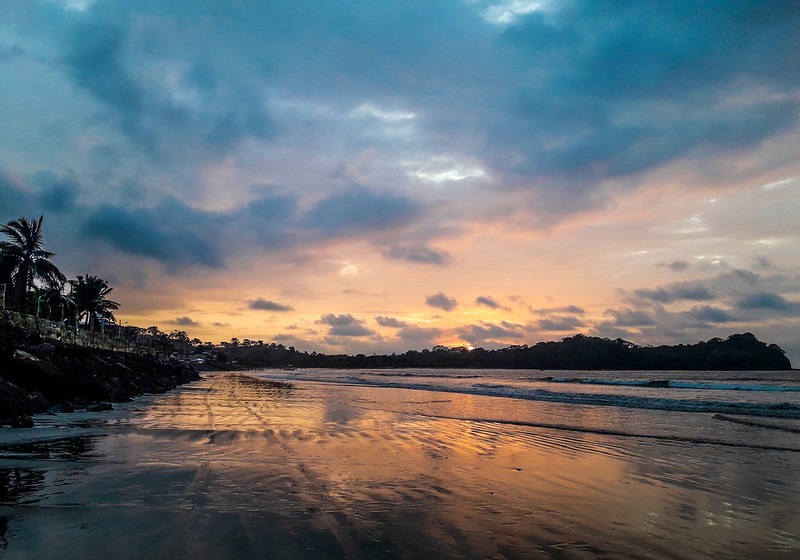 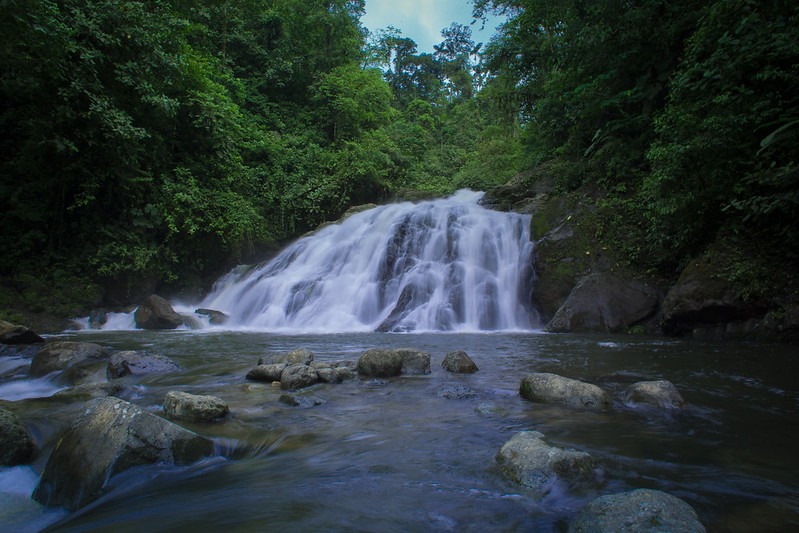 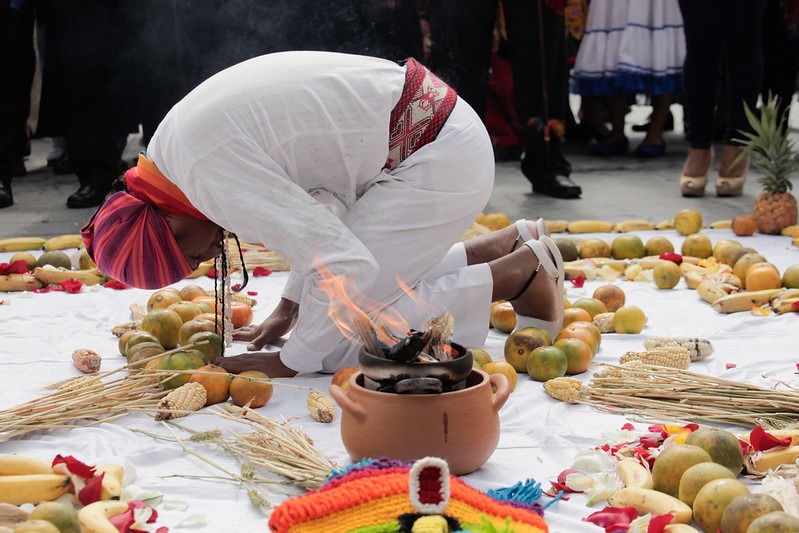 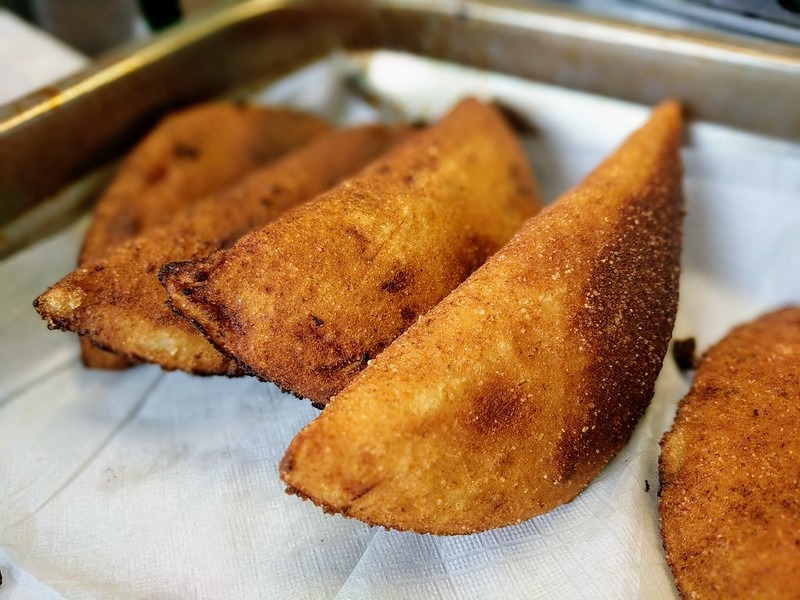 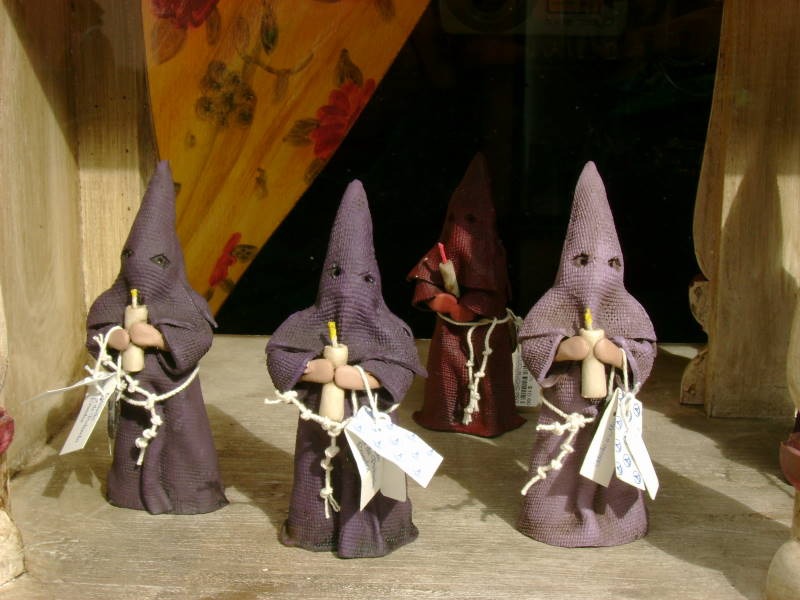 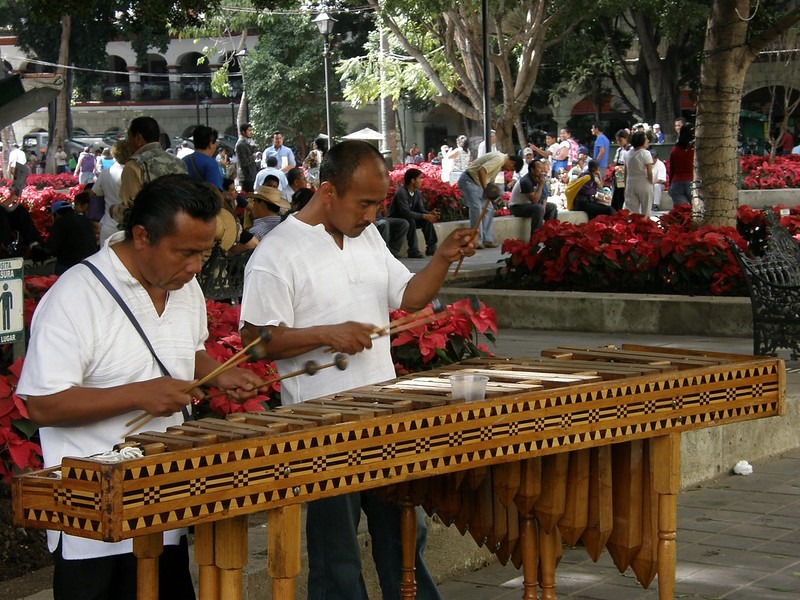 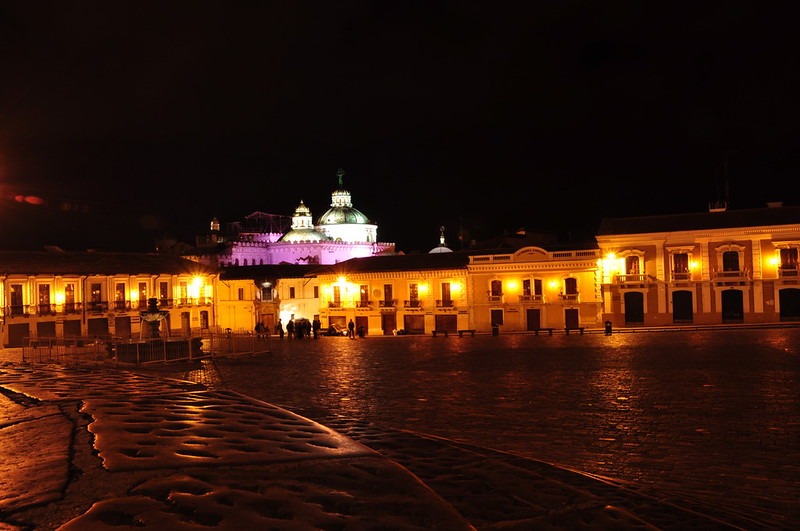