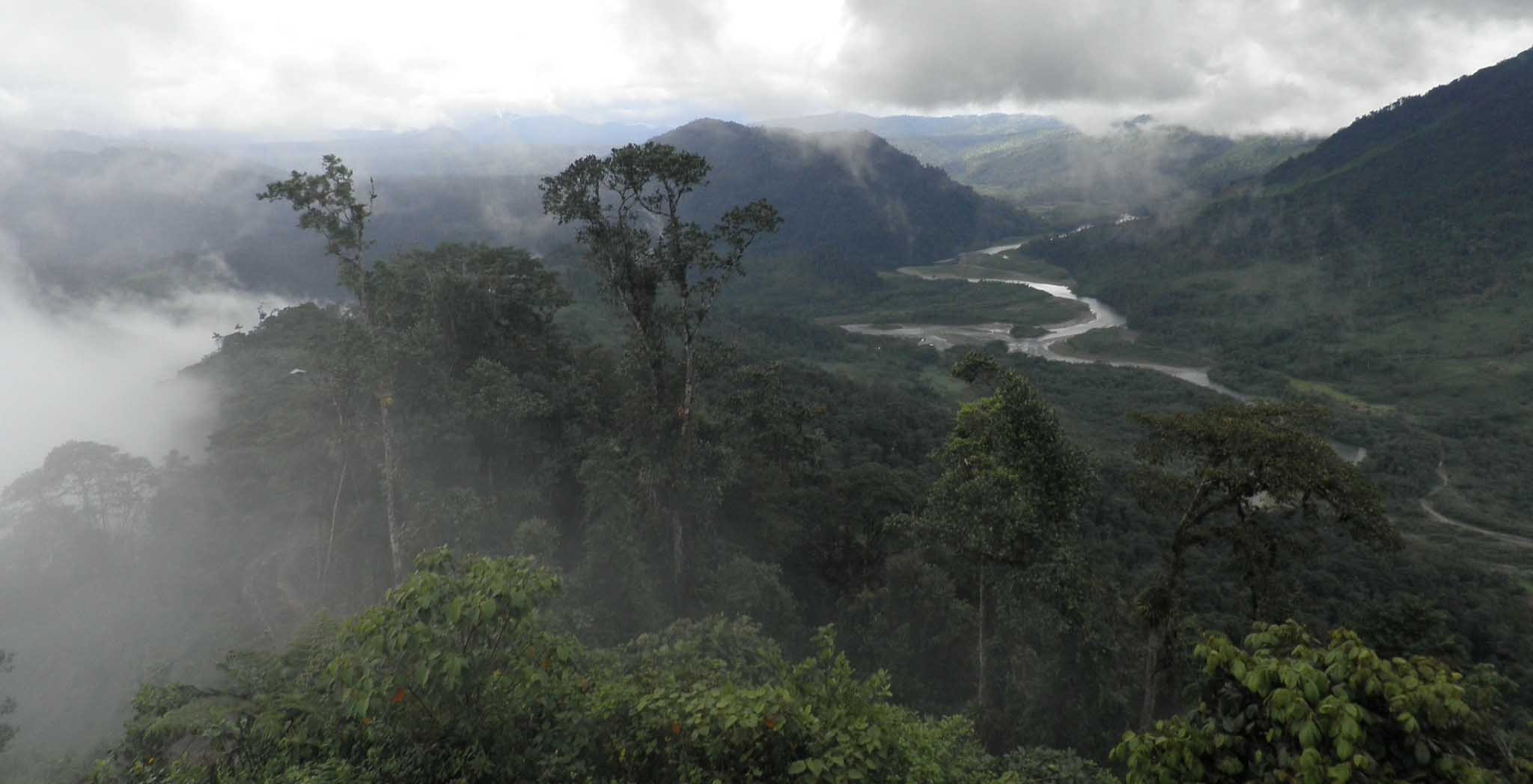 The heartland of Ecuador

The Central Andes of Ecuador are the heart of the country, most of the indigenous population is found in this region as well as the highest peaks and active volcanoes. Here we find the famous "Avenue of the Volcanoes" as dubbed by Alexander Von Humboldt (famous German explorer). Great opportunities for visiting indigenous produce markets and small artisan villages, the famous Devils Nose train ride, mountain climbing and biking, trekking and camping.

Riobamba - The Sultan of the Andes

Surrounded by spectacular snowcapped peaks such as Chimborazo (at 6,310 m, Ecuador's highest peak), Riobamba, the former capital of Ecuador, is known as the Sultan of the Andes. With its colonial architecture and cobblestone streets, Riobamba's Old Town is a favorite among foreign tourists, with Parque Pedro Vicente Maldonado being a particularly interesting destination. Other places worth visiting are the Natural Science Museum at Colegio Maldonado, the religious art museum in the Concepción Convent, the Banco Central Museum, the Cathedral, San Antonio Church, the Basilica, and La Merced.

A 30-minute drive from Riobamba brings you to this cemetery, famous for its Pleistocene animal fossils and the human remains found in Chalán gully which date back to 8,000 BC. There is a museum here and a sanctuary to Señor del Chuypi.

The spectacular train ride from Riobamba to the coastal plain below, includes a world-fmaous stretch of track known as the Nariz del Diablo (Devil's Nose). Here, the train zigzags from the dizzying heights of the Andes to sea level in a matter of hours. Be sure to enjoy the view from the train's roof!

Ambato - Land of Fruits and Flowers

The provincial capital of Tungurahua, is most well known for its Carnival celebrations during which bullfights and parades turn the city into the nation’s most festive city towards the end of February. Located just two hours from Quito, Ambato is locally known as the Land of Flowers and Fruit and has traditionally been one of the Andes main trading centers. Ambato is also well known for its abundant production of artisan products, especially leather goods. Places of interest in Ambato are the Juan Montalvo and Colegio Bolívar museums where collections of archeological artifacts and scientific displays await the visitor. Also worth visiting is Montalvo’s house with its impressive ethnographic collection. Noteworthy churches include the Cathedral, San Francisco, Santo Domingo, La Merced, La Medalla Milagrosa, and the Padres Josefinos Temple.

Baños - Gateway to the Amazon

With its friendly people, well developed tourist infrastructure, lush surroundings, ideal location, and delicious cuisine, Baños de Agua Santa is one of the nation’s most popular destinations and gateways to the Amazon. Located on the eastern slopes of the Andes, Baños is the departure point for trips to jungle destinations such as Puyo, Misahuallí, and the waterfalls of Agoyán, Inés María and the famous Pailón del Diablo, as well as to the Andean peaks of Tungurahua and El Altar. Offering endless opportunities to the ecotourist, Baños is a center for various adventure sports such as kayaking, trekking, and mountain biking. Other attractions include the Virgen de Agua Santa Sanctuary and the various thermal hot springs in the area.

San Pedro de Pelileo has become a hotspot for the production of artisan products as well as being an industrial textile center producing denim clothes. The community of Salasaca, famous for their woolen and sisal rugs and wall hangings, is also a popular tourist destination . Píllaro, to the northeast of the province, is the gateway to the mysterious Llanganates and is famous for its pear, peach, and plum crops. Patate is also a large agricultural center producing delicious avocados, babacos, tree tomatoes, mandarins, limes, and grapes.  San José de Chimbo (20 km from Guaranda) is famous for its skilled craftsmen who handcraft guitars as well as fireworks. Chimbo has a museum dedicated to the story of Christ's shroud and the locals worship the El Guayco Virgin. Near Chillanes (67 km from Guaranda) you can visit the archaeological remains of the Chillanes tribe and in San Miguel, the Guardias Caves (10 minutes from town) and the Virgin of Lourdes Grotto (20 minutes from town) are a must-see for tourists. Guano, ten minutes from Riobamba, is an important handicraft center known its wool and carpet weavings. Guamote, 40 km from Riobamba, has the highest concentration of indigenous population in the country and is also famous for its colonial architecture as well as for its woolen and sisal handicrafts as is bustling Alausí, a two-hour drive from Riobamba. Outdoor sports enthusiasts will enjoy fishing at nearby Lake Ozogoche and trekking in Chunchi, where wildlife abounds in the dense vegetation . Visitors to this region also enjoy visiting churches and early colonial homes in Cajabamba and the church at La Balbanera - the oldest Spanish-built structure in the area.

This section of the Andes is full of spectaculaly beautiful towering peaks and active volcanoes that are ideal for climbing, some of which include Chimborazo (6310 m.), Tungurahua (5087 m), Carihuairazo (5020 m), Cerro Hermoso (4571 m), and Sagatoa (4153 m). Other famous mountains for trekking and climbing are the Altar, Sangay and Quilotoa.

58.560 hectares in size, is so large that it overlaps into the provinces of Bolívar and Tungurahua. Mount Chimborazo is the Reserve's main attraction and is especially popular with climbers as is Carihuairazo. The Reserve aims to preserve endangered Andean species such as vicuña, llama, and alpaca.

With a elevation of 5016m, Tungurahua is Ecuador's 10th-hihest peak. It was a beautiful, cone-shaped volcano with a small cap of snow perched jauntily atop its lush, green slopes. Since the many eruptions beginning in late 1999, much of the snow has melted, and the cone and crater have changed in shape. Since the date of its most recent reactivation, in September 1999, Tungurahua, has become the most beautiful and impressive tourist attraction in Ecuador and, perhaps, all of Latin America.

This park stretches from the Andes to the Amazon, with its 520 thousand hectares covering much of the provinces of Chimborazo and Morona Santiago. The reserve's elevation varies between 800-5400 m and the reserve's most impressive peaks include Sangay, el Altar, and Tungurahua. Many diverse species of wildlife can be found here such as mountain dantas, spectacled bears, and ocelots. The temperature varies between 6 and 24 degrees centigrade.

This huge reserve (219707 hectares) covers an area larger than that of Cotopaxi, Napo and Pastaza provinces put together. The park consists mainly of Andean forests and exuberant Amazonian forests but the main attraction are the mountainous Llanganates, of which Cerro Hermoso and Pisayambo lake system form a part. Legend has it that Atahualpa's ransom in gold was hidden here hundreds of years ago.

Quilotoa crater lake - The Green eye of the Paramo

On the road that goes from Latacunga into the coastal lowlands, just by the town of Zumbahua some 10 km. to the north is the entrance to reach the Quilotoa lake an extraordinary turqoise colored water formation located at the bottom of the crater with the same name, in the Chugchillan mountain corridor. The mineral content of the waters disallows the existence of certain species. It is possilbe to hike down to the lake, it will take you a half hour. We recommend that you hire a mule for your return (the locals hire this service for US $3.00). Enjoy the hike down and the ride up while you take in the amazing view.

In the surrounding highlands you find various mountains full of paramo and wildlife. The place that is located by the Illiniza twin peaks, is famous for the practice of mountain biking. On the road that goes towards the lake it is possible to observe the artisans' clay pottery of pre-Columbian designs to this day. Once you are in the highlands, you can see the Indian peasants, as they live and work in communities. Maybe you are fortunate to see them in action, men and women in their colorful shawls harvesting together. The "llamas" are still used for cargo (this was practically abolished after the Spaniards introduced the horse in America). The landscape is that of different colored patches of crops even on the steepest mountainsides. Llamas and sheep are part of the daily lives. These animals provide food, wool for clothing and weaving, and transportation. Close to "Zumbahua" you will run into "Tigua", a small town with a community dedicated to produce naïf paintings not on traditional canvass but on dried sheep skin.

The area of Ilinizas, located between the provinces of Pichincha and Cotopaxi, is an eternal spring for the basin of the Esmeralda River, formed by the beds of the Toachi, the San Pedro and the Pilatón. The reserve, of 149.900 has, is like a sponge because its two elevations form a geologic barrier that condenses the humidity coming from the coast.

Because it is so difficult to access it, the biological diversity of Ilinizas is still a mystery. The reserve is divided in three sectors. The first one is conformed by the Mountain Ranges of Zarapullo and of Tenefuerte, the Ilinizas and Corazón Hills and the Toachi River. The second one is located at the south and has an extension of 23,600 has. The last sector is a small area that covers an extension of hardly 800 has and it corresponds to the Quilotoa Lagoon.

Climbing the summit of the Iliniza is a fascinating experience, but it is advisable to do it between August and December in order to avoid the rains. It is also recommended to be in the company of a guide to be able to enjoy the main tourist attractions.

Follow the footsteps of Ecuador's indigenous people as you take this off the beaten path trail from Achupallas to the Inca ruins at Ingapirca.

You will hike around 4 - 6 hours per day crossing the páramo grasslands, the Sanasuin lake by tres cuchillas point, Paredones ruins, small lost towns of the Andes as Tambo Cajon, following hidden trails of an ancient commerce route used by Inca and pre - Inca cultures.

Your nights are spent camping and enjoying the stars. Upon arrival at Ingapirca you will enjoy Ecuador's most important archaeological sight.

The Incas made an impressive system of roads, which connected Quito, in the northern part of their empire, with Talca (south of Santiago, Chile). In the southern part of Ecuador's Central Valley it is possible to follow one of the old Inca trails, leading to the Incan ruins of Ingapirca. On route to the ruins we pass through remote highlands and indigenous communities, encounter enchanting peaks and beautiful lakes. This hike requires normal physical health.