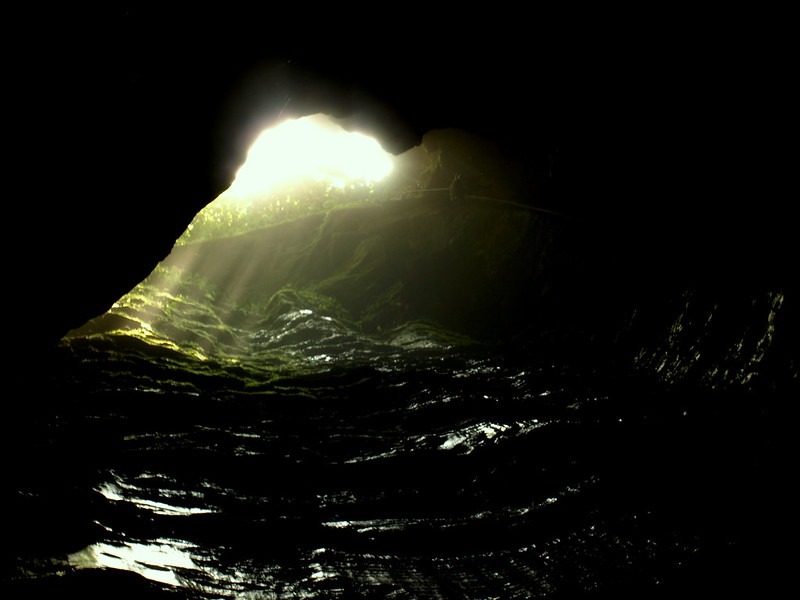 Caving in Ecuador, there are few locations yet they are well worth a visit, most of them in the Amazon lowlands, there are also found in the Choco rainforest and Lava Caves in the Galapagos Islands. We can organize expeditions and offer unique underground adventures. They can be an add on to a lodge stay or rainforest tour. The Tayos caves are a full expedition in themselves.

Below we describe the main cave systems in Ecuador:

The caves were named after the cacique Jumandi, who was a resistance fighter against the Spanish conquistadores.

Cavernas de Jumandi are three different caves. One of them is a river cave. This part of the cave is regularly visited with tourist groups. The visitors have to walk through the bed of the river, over boulders and rimstone pools. Fortunately the water is very warm. Within the cave we can find white cave fish.

The cave is situated at a small leisure complex with snack bar, swimming pool and flume. The cave entrance is some 4 to 5 metres wide by 6 to 7 m high, a modest stream flows out of the entrance. It is necessary to wade through pools and climb waterfalls until the dry series is reached. Here the passage, often less than 2 m high twists and turns, passing through small chambers, almost filled with stalactites. Eventually the upper entrance is reached. A steep, tricky, muddy climb aided by tree roots leads to the surface. The way back to the leisure complex is just as difficult. A muddy slide down through the jungle.

About 4 hours from Quito just before Archidona in the Amazon basin, you will reach Lagarto Caves, these are also filled with stalactites, have limestone pools. The Kichwa community of Mondayacu manages these caves and provides a local guide. These caves are not so famous, which is the reason we recommend them as first choice since it is much more private and typical. In this cave complex you can choose between the grades of difficulty and combine the visit to a very nice canyon which you can climb up to through a cave. We arrange all details for the visit (guides, equipment, etc.).

Los Tayos Cave, 110 km from Macas, in forested country at an elevation of 550 m in the eastern foothills of the Andes. Many legends exist about these caves. According to locals, their depths hide valuable treasures.

The main entrances to the caves are 2 vertical shafts 55 m and 75 m deep and approximately 60 m apart. While the total cave system is large and complicated, with a surveyed length of 4900 m including several parallel systems, some with narrow exits, only the area within 200 m of the 2 main shafts was occupied
by Oilbirds.

The deep galeries are of a calcarean formation and seem sculpted by humans. The distribution of immense stones in a simetrical form give the impression of great block walls. There are various caves forming an underground laberynth and it is possible to pass from one cave to another with moderat dificulty, they are full of stalactites and stalactmites. The caves descend to about 50 meters towards the center of the earth, they can be 200 mts. wide with a length of 9 km. There formation is due to the erosive action of 3 underground rivers that run through the caves. the galeries could fit in a full cathedral.

The caves are inhabited by Tayo birds (Nocturnal oil birds). The oil bird is an endemic species and a nocturnal bird who will depart early evening from the caves in search of fruits and is unique in comparison to all other carnivorous nocturnal birds.

Apart from the Oil birds the caves contain a great biodiversity yet to be studied.

In an expedition in 1976 archaeologists found ceramic, metal discs, sea shells and other remains inside the caves. From time to time the Shuar indians come to the caves to hunt oil bird hatchlings due to their rich fat content, it is possible the ceramic remains belong to their ancestors yet they are similar to those used by coastal cultures like Machalilla.

This is a cave system in the Choco rainforest, they are located close to the Trinidad afro-ecuadorian community on one of the small tributaries of the Cayapas river. The caves are inhabited by bats. It is possible to explore the caves without dificulty. A visit to the caves can be part of a stay at Kumanii lodge.

Lava Tubes in the Galapagos Islands

There are several lava tubes miles long and a up to 7 meters in hight that can be explored on Santa Cruz Island in the Galapagos archipelago, these are of volcanic origin and offer a great geological insight into the Islands natural history.

It is possible to visit these lava tubes as part of a Galapagos cruise.